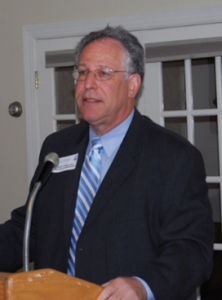 Marty is a partner at Arbus, Marbruch & Goode Attorneys at Law and serves as the Township of Ocean attorney. He is a founding member of the GOTCC, a Past President, a past multi-year Golf Outing Chairman, an unofficial historian, and Master of Ceremonies at our annual Installation & Awards Luncheon and Golf Outing Awards Dinner. He is a past Hall of Fame inductee and multi-GOTCC award-winning honoree. He is the 2nd person to receive this honor.

Martin J. Arbus
Martin J. Arbus has been practicing for almost 40 years and specializes in Commercial and Real Estate litigation, Personal Injury, Malpractice, Estate Litigation, Municipal Law, and Planning and Zoning Matters.  He has been chosen as an arbitrator for both Commercial Matters and Personal Injury cases in the Monmouth County Courthouse.
Mr. Arbus has been designated by the New Jersey Supreme Court as a Certified Civil Trial Attorney since the certification process began in 1982.  Out of 80,000 lawyers in New Jersey, he is one of only a small percentage of lawyers that has earned this elite professional credential and is among approximately 200 lawyers statewide that have maintained that status since 1982.
Mr. Arbus has been the Township Attorney in the Township of Ocean since July 2005. Prior to that he had been the Planning Board Attorney in Ocean for 14 years and had also been the Judge of the Ocean Municipal Court.  He has also been the Planning Board Attorney in the City of Long Branch for over 10 years.
Mr. Arbus acted as the attorney for the Greater Ocean Township Chamber of Commerce (GOTCC) since its inception and was the President of that organization in 1991.  He was honored as their Business Person of the Year and was inducted into the GOTCC Hall of Fame as part of the first group of inductees.  Mr. Arbus has also served as the President of the Monmouth County Business Association (MCBA) in 1986 and as its attorney and Board Member for many years.

Mr. Arbus graduated from Rutgers Camden Law School with honors in 1976.  He is licensed to practice in the New Jersey State Courts, U.S. District Court of New Jersey, U.S. Court of Appeals for the Second Circuit and Third Circuit, and the United States Supreme Court.  He is also a member of the Monmouth County and New Jersey Bar Associations. You can contact Mr. Arbus at marbus@arbusmaybruch.com.